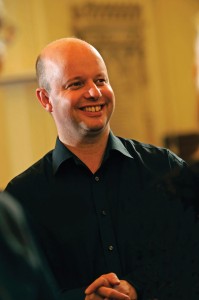 David Ogden (b.1966) is a professional conductor and composer based in Bristol. He conducts the vocal ensemble Celestia, Exultate Singers, City of Bristol Choir, workplace choirs at Airbus, Arval and Bristol Beacon, and in his post of Head of the Bristol Choral Centre, he organises and directs the 140 strong Bristol Youth Choirs in association with Bristol Music Trust.

He is Director of Music at Holy Trinity Church, Westbury-on-Trym, Bristol where he trains and directs three choirs of young people and adults as part of the church’s active music programme.

For over thirty years he has worked with numerous professional and amateur groups of all shapes and sizes in many fields of music making, including church music, concerts, musical theatre and opera, community projects, primary and secondary level educational workshops, from small children’s groups to the City of Birmingham Symphony Orchestra. He has conducted over 100 large-scale choral works including first performances of pieces by Shostakovich, Roxanna Panufnik, James MacMillan, Francis Grier, Thomas Hewitt Jones, James MacMillan, Toby Young, James Whitbourn, Naji Hakim, David Bednall and Roderick Williams.  He has made 15 CD recordings and directed choirs in numerous cathedrals, churches  and concert halls in 16 European countries and in the USA, Philippines, and South Korea. He regularly directs choral courses for  ‘Run by Singers’ around Europe.

David has held posts as Director of Music at Clifton Cathedral and Clifton Diocese, Regional Director of the South West and Midlands of the Royal School of Church Music and conductor of the RSCM Millennium Youth Choir. He has conducted choirs on BBC Radios 1, 2, 3, 4, 5 and the World Service, and worked as conductor, arranger and music adviser for over 20 years on BBC TV’s Songs of Praise. He was Religious Music Adviser for the BBC’s hit series Call The Midwife, and worked with the Royal Mail Choir in the BBC Two series The Choir: Sing While You Work. David conducted the choir for a charity single with X-Factor winner Joe McElderry in 2013 and on the 2013 Royal Mail Christmas TV advertisement. In 2014 the choir raised over £50,000 for Prostate Cancer UK.

He also regularly leads vocal workshops for businesses and organisations.

His compositions are published by the RSCM and White Light Publishing, and are performed in schools and churches worldwide. His music and arrangements are broadcast frequently on BBC radio and television. In Bristol, he has written songs and directed choirs for the opening of Cabot Circus, the MShed Museum, BBC Food & Farming Awards and the NHS In Memoriam project.

In April 2008 one of his anthems was performed by a 250-strong choir in the presence of Pope Benedict XVI as part of a Papal Mass in Washington Nationals Baseball Stadium in Washington DC with a congregation of 40,000 people in attendance. In 2015 David was made a Fellow of the Royal School of Church Music in recognition of his services over many years to church music and the RSCM both in this country and internationally.