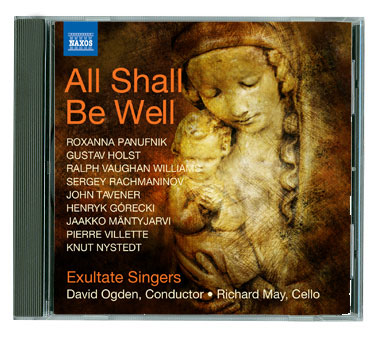 “The emergence of the Exultate Singers, founded in 2002 by David Ogden, adds to the growing list of stellar British mixed choirs capable of producing topnotch performances of some of the most dauntingly challenging choral literature.” AllMusic

“This imaginatively programmed disc marks the Exultate Singers out as a choir to be reckoned with.” BBC Music Magazine

“Sung with requisite purity by the Exultate Singers under David Ogden… the most powerful tracks are John Tavener’s exotic Syvati and Henryk Górecki’s Totus tuus, a work that encourages pure contemplation.” Financial Times

“Exultate’s style of singing stands apart from the mainstream major British choral groups, the warm quality generated by thirty-eight voices, and being much larger than their famous counterparts, the tone is not stressed. Very good sound from the popular UK recording location in St. George’s, Bristol.” David Denton, Naxos.com