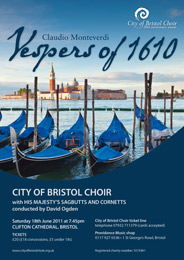 Saturday 18th June 2011 at 7.30pm A spectacular finish to City of Bristol Choir’s anniversary season with a performance of Monteverdi’s Vespers of 1610 in Clifton Cathedral, Bristol, in a collaboration with virtuosic early music ensemble His Majesty’s Sagbutts and Cornetts. The group has a worldwide reputation and its performance of the work was one of the highlights of the 2010 BBC Proms season. With performers arranged around the Cathedral echoing the galleries and balconies of St Mark’s Venice this unique piece wonderfully combines the glories of the Renaissance with the opulence of the Baroque. Tickets from City of Bristol Choir ticket line on 07932 711379 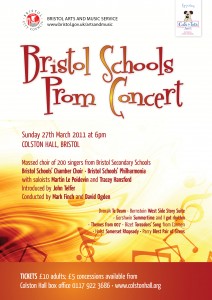 Sunday 27th March 2011 at 6pm David Ogden and Mark Finch conduct a mixed choir of 200 singers from more than 20 secondary schools in and around Bristol together with the 70-strong Bristol Schools’ Philharmonia in Bristol Arts and Music Service’s first Bristol Schools’ Proms.The programme includes Dvorak’s joyful Te Deum, Parry’s evergreen Blest Pair of Sirens and a medley of favourite songs by George Gershwin. Also included in the exciting programme are folksongs and choruses for separate boys and girls voices and orchestral numbers such as Holst’s Somerset Rhapsody, Bernstein West Side Story Suite and music by John Barry in Themes from 007. Martin le Poidevin (bass) and Tracey Hansford (soprano) will be joining in the fun and the evening will be compered by local celeb and BBC Archers vicar, John Telfer. The concert is in aid of the Cots for Tots Appeal which supports special care babies at St Michael’s Hospital in Bristol. Tickets are £10 for adults, £5 concessions, available from the Colston Hall box office on 0117 922 3686 or http://www.colstonhall.org/ 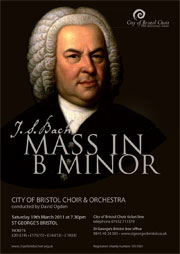 Saturday 19th March 2011 at 7.30pm David conducts City of Bristol Choir and Orchestra in a performance of Bach’s final choral work, Mass in B Minor. This performance, with chamber orchestra in the intimate acoustic of St George’s Bristol is sure to be mesmerising, showcasing City of Bristol Choir’s versatility moving from the hushed, deeply moving moments in the Credo to the exhilarating, fast-paced choruses. Tickets from St George’s box office on 0845 40 24 001

Saturday 22nd January 2011, 11am-4pm Come and enjoy what promises to be a fantastic day’s singing at St George’s Bristol this Saturday! David leads this day which features songs of stage and screen with a fantastic live band and members of City of Bristol Choir.  A glorious, but informal, performance with the band concludes the day at 3.15pm. Tickets are £11 for adult singers and £5 for under 18s (under 14s must be accompanied by an adult). Audience tickets for the 3.15pm performance are £3. Tickets are available to book now through St George’s box office by phone on 0845 40 24 001, in person at the box office or online at www.stgeorgesbristol.co.uk

Commemorating the 400th anniversary of the publication of the King James Bible, the RSCM has published a new book, The Word Revealed, which includes David’s anthem Teach us, good Lord which sets words by St Ignatius of Loyola. The book includes a varied selection of hymns, songs, readings and anthems, some specially written for this festival, and is ideal for RSCM choral festivals and special services laid out as a festival service conveniently in one volume. A sample pdf is available to view online and the book can be purchased from RSCM Music Direct. 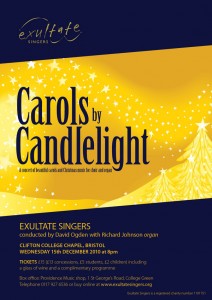 Wednesday 15th December 2011 at 8pm David conducted Exultate Singers in the choir’s annual Carols by Candlelight concert, which was held this year in Clifton College Chapel, Bristol. Listen to a live recording from Carols by Candlelight 2010 of Away in a manger, performed with the singers dotted around the chapel 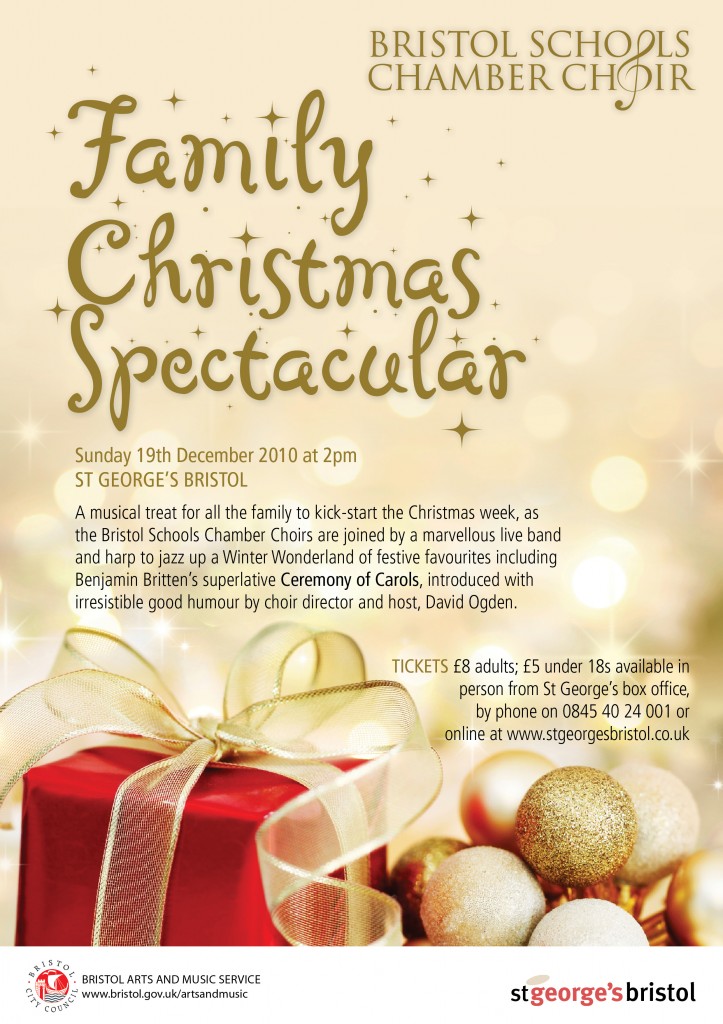 Sunday 19th December 2010 at 2pm A musical treat for all the family to kick-start the Christmas week, as David conducts the Bristol Schools Chamber Choirs and a live band in a ‘Winter Wonderland’ of festive favourites including Benjamin Britten’s superlative Ceremony of Carols. Tickets £8 adults, £5 under 18s from 0845 40 24 001, www.stgeorgesbristol.co.uk

Wednesday 15th December 2010 at 8pm David conducts Exultate Singers in the choir’s annual Carols by Candlelight concert, which this year will be held in Clifton College Chapel, Bristol. Come and enjoy an atmospheric evening of seasonal music for choir and organ. Tickets £15 (concessions £13, students in full time education £5, children under 18 £2) available from Providence Musics shop on 0117 927 6536 or online at www.exultatesingers.org/shop 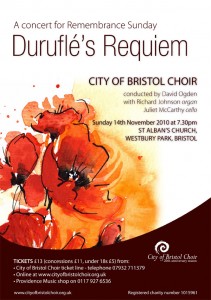 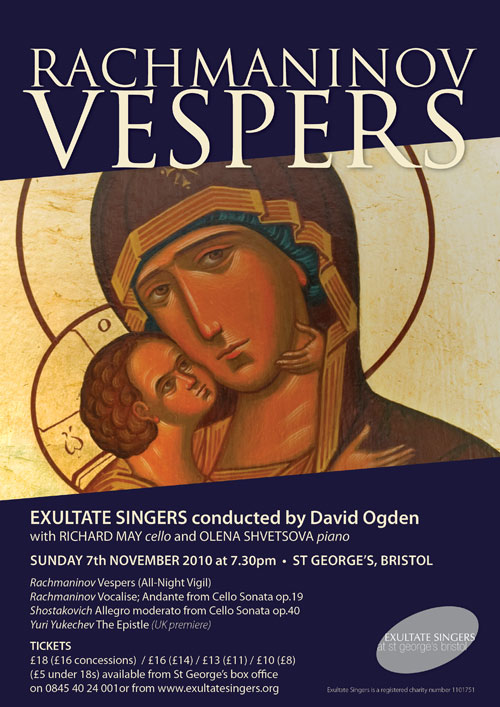 Sunday 7th November 2010 at 7.30pm David conducts Exultate Singers in a performance of Rachmaninov’s lavish music for the Russian Orthodox church, the All-Night Vigil (often simply known as the Vespers), one of the greatest choral masterpieces of the twentieth century. Written for unaccompanied choir throughout with deep textures, sumptuous harmonies and simple, beautiful melodies, it is unmistakably Russian and perfectly suited to the warm, clear acoustic of St George’s Bristol. In an evening of Russian music, the virtuosic cellist Richard May and concert pianist Olena Shvetsova perform movements from Shostakovich and Rachmaninov’s Cello Sonatas and the haunting Vocalise. The UK premiere of Yuri Yukechev’s The Epistle for choir and cello completes the programme. Tickets £10 – £18 from St George’s box office on 0845 40 24 001 or online at www.exultatesingers.org/shop