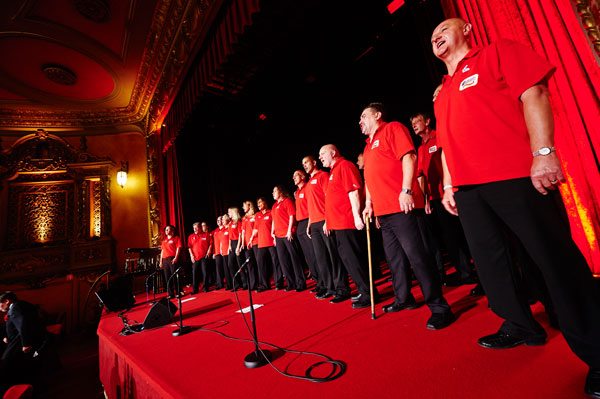 Fresh from their success on BBC Two’s hit series Sing While You Work, the Royal Mail Choir will join leading Bristol choirs at St George’s Bristol on Sunday 1st December to sing, shave and raise money for Prostate Cancer UK.

Beginning at 3pm at the concert hall just off Park Street in central Bristol, over 150 singers will assemble on stage under the direction of choirmaster David Ogden for a riotous afternoon which will include the posties singing their iconic arrangement of the Beatles classic All You Need Is Love as featured in the Royal Mail Christmas advert. All the fun will be led by the presenter, BBC Radio Bristol’s Steve Yabsley.

Live shaving will take place on stage, with men who have been growing Movember moustaches having them removed by a professional barber, a moment that can’t come soon enough for local PR guru Pam Lloyd. Her husband Dieter, Managing Director of fresh produce PR specialists Pam Lloyd PR said, “It was Pam’s idea that I have a go, but the reality has been more than she was prepared for. Each successive incarnation of the mo from Zapata to Burt Reynolds and then a poor Poirot imitation has been greeted with horror.”

As well as contributions from the accomplished chamber choir Exultate Singers, the 80-strong voices of City of Bristol Choir and the young musicians of Bristol Schools Chamber Choir, the concert will mark the debut performance of a new 8-voice ensemble, More Than Four.

Since being formed for the BBC Two television series, Royal Mail Choir has raised over £40,000 for Prostate Cancer UK, including matched giving from Royal Mail, through concerts, donations and sales from the single it recorded with X Factor winner Joe McElderry.